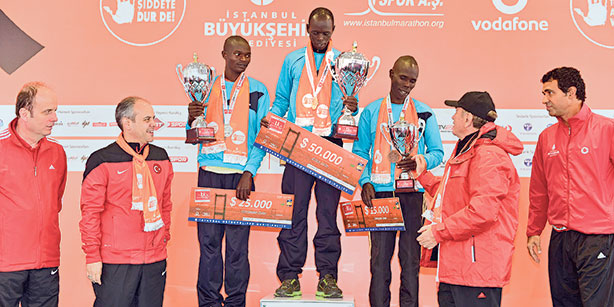 Kenyans took the first three places in the 42-kilometer marathon, which was held on Sunday with the attendance of many athletes from around the world. Chelimo took first place with a time of 2:11:17, and was followed by Evans Kiplagat with a time of 2:12:51 and Silah Kipkemboi Limo with 2:14:02.

The women’s 42-kilometer run was won by Ethiopian runner Amane Gobena, who clocked in with a time of 2:31:58. Second place was taken by Kenyan Gladys Chepkemoi Chemone, and she was followed by Meryem Erdoğan, a Turkish citizen of Ethiopian origin.

The prizes were presented to the winners by Youth and Sports Minister Çağatay Kılıç, İstanbul Mayor Kadir Topbaş and other protocol members.
The top runner received $50,000, second-place $25,000 and third-place $15,000.

An incident took place during the Fun Run when the leg of a 45-year-old attendee became stuck in a road shaft. Fulya Ufuk waited for almost an hour before firefighters could come and free her leg.

The marathon started at 9 a.m. on Sunday, with runners taking off from Altunizade on the Asian side, crossing the Bosporus Bridge and continuing through the bustling center of İstanbul.

The Vodafone İstanbul Marathon was awarded the IAAF Gold Label Road Race label in 2014 and is a popular event on the marathon calendar.