August is the time for Istanbul Modern’s Young Architects Program (YAP) events. Initiated by Istanbul Modern in collaboration with The Museum of Modern Art (MoMA) and MoMA PS1, the YAP is held biannually during the summer and offers young emerging architects the opportunity to design a temporary installation in Istanbul Modern’s courtyard. The venue, which is in front of the museum and made as a garden and a public space “Sky Spotting Stop” designed by SO? Architecture and Ideas is hosting exclusive and free of charge events.

On August 4 within the scope of YAP Istanbul Modern, performance art and social sculpture collective Silsila and Jeffrey Baykal-Rollins present a performance titled Flux. Created for Istanbul Modern’s waterfront area, Flux is a site-specific group performance embodying a transformative cultural reflection about the future. Directed by Jeffrey Baykal-Rollins, this two-part performance is choreographed by Ernesto Pujol, known for his site-specific performances and social choreographies. The one-hour performance will integrate itself into the museum’s architectural kinetic installation on view, creating an ephemeral hybrid space, an architecture-within-the-architecture, part surreal garden and part secular cloister. Audiences may sit and experience a performative meditation that engages aspects of contemporary life in Istanbul, with its lingering past and its pending future. Baykal-Rollins is interested in artistic collaboration and has also invited artist Ernesto Pujol to assist him in choreographing the piece. Pujol is a New-York based performer, internationally known for his public durational performances. He works in the tradition of German choreographer Pina Bausch’s Tanztheater.

Flux is the third project of the new Silsila Collective’s contemporary programming. Baykal-Rollins founded the collective two years ago, to train and perform with art students, art professionals, and urban citizens of all ages drawn to this experimental new medium and its potential social agency through collective portraiture. Prior to this performance, part of the group performed in Venice on May 23, at the Piazza San Marco, responding to that spectacular site. Images are available through:
http://silsilacollective.blogspot.com

Baykal-Rollins, who has been living and working in Istanbul for the past decade, engages in what is currently known “art as social practice,” combining performance with image-making, alternative education, institutional critique, and cultural studies in a reflection about contemporary existence. The artist hopes to continue working in partnership with local, regional and international institutions, growing his Collective as Istanbul becomes a stage for global art.

Later on August 22, at 6 pm Rob Sweere’s artwork Silent Sky#, with the collaboration of IPA International Performance Platform, will be hosted at Istanbul Modern’s garden within the scope of the YAP Istanbul Modern: Young Architects Program events. Silent Sky# Project, by Rob Sweere who has presented forth various kinds of output in museums, galleries, and outdoors between 1989 and 1995, turns into one immense happening with the combination of small events Sweere performed in various parts of the world. Silent Sky# is realized with the direct guidance of the artist and with the collaboration of the audience, to create an atmosphere in which the participants can interact with the artwork in the most intense manner.

Finally on August 23 Istanbul Modern hosts Monali Meher’s performance, “Visiting Marmara”, with the collaboration of IPA – International Performance Platform. For Istanbul, the artist reinterprets her previous performance “Visiting Pearl,” during which she has walked backwards with incense sticks in the city of Guangzhou, China. The performance starts from Istanbul Modern’s garden, and ends up in a mystery location along the Bosphorus.

The Sky Spotting Stop, designed by SO? Architecture and Ideas, the long awaited summer venue of Istanbul Modern Museum’s garden, opened on June 25. The garden venue will be open until Oct. 20.

Initiated by Istanbul Modern in collaboration with The Museum of Modern Art (MoMA) and MoMA PS1 in New York, the “YAP Istanbul Modern: Young Architects Program” is held biannually during the summer, offering young emerging architects the opportunity to design a temporary installation in Istanbul Modern’s courtyard.
The program’s aim is to encourage architects to address environmental issues such as sustainability, re-use, and re-cycling, and to explore innovative design ideas providing elements of shade, water, and seating that would increase the possibilities of use in open-air spaces. Providing a popular urban venue for the summer, these designs are expected to protect visitors from the heat of the city, host diverse events, and create intimate social spaces for city-dwellers – all within a modest budget and through reasonable architectural solutions.

The YAP began in 1998 in MoMA PS1’s courtyard in New York, and went on to become international with the participation of CONSTRUCTO in Santiago, Chile in 2010 and the National Museum of XXI Century Arts (MAXXI) in Rome in 2011. In 2012, MoMA and MoMA PS1 invited the Istanbul Museum of Modern Art in Turkey to join the program and further expand it. Istanbul Modern’s sculpture garden and the gravel area on the filled ground in the courtyard of the museum – itself situated in one of the warehouses designed by Sedad Hakkı Eldem – was selected as the project site for YAP Istanbul Modern. The jury, which came together to select the winning project, was formed of architectural experts and of representatives from Istanbul Modern and the other YAP programs. From among the proposals of the five finalists, the jury selected the project “Sky Spotting Stop” designed by SO? Architecture and Ideas.

Events of the Sky Spotting Stop

“Sky Spotting Stop” shades the courtyard of Istanbul Modern while floating gently on the hidden waters of the Bosphorus, projecting its host space upon the city. Thanks to the structural characteristics of the courtyard and the warehouse in which the museum is located, the motion of the waves is transferred to the movement of the architectural elements. The courtyard, which, though situated right by the shore, is disconnected from it by a customs zone, is defined anew thanks to shading elements supported by buoys floating in the water right beneath the courtyard ground. The courtyard becomes part of the skyline thanks to this ephemeral, albeit lively addition, which thus becomes visible both from the Bosphorus and the highest points of the city. Visitors in the courtyard can spend time under the undulating shade during the day and among the varying reflections after nightfall. The various uses of the courtyard are shaped by elements made from reused materials; reused vehicle tires covered with fishnets become lightweight, sturdy, portable units. The altering landscape that emerges and the constantly moving canopies transform the courtyard into a new stop in the city for resting, gathering, playing, or “sky-spotting.”

The project is feasible and carries no financial risks of exceeding the allocated budget. The engagement of local industrial groups and the utilization of local and used materials were noted as positive aspects. The originality of the selected project will contribute to the aesthetic world of architecture and design.

Dedicated this year to silent and oppressed women, the festival features women and their films from 19 countries. In addition to the themed sections, opening and closing ceremonies, 5th Golden Okra Awards, workshops and discussions, the festival includes the retrospective programs of two inspiring and empowering female filmmakers: Yeşim Ustaoğlu, one of the “auteurs” of Turkey’s new cinema, and Doris Dörrie, who re-constructs the relationship between men and women in her work with a humorous style. 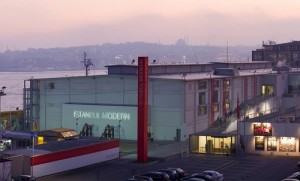