Arts & Entertainment A to Z 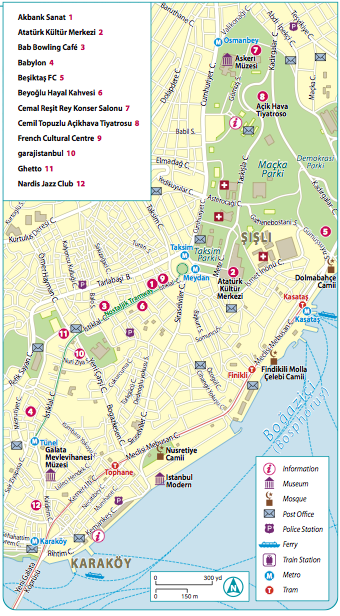 One of the best music venues in the city, this started out more of a club but has found its niche as a great live music venue. Most of the acts are international, incorporating a range of music genres from nu-jazz to Latin to Balkan gypsy-techno fusion. Guest international DJs give the place a more clubby feel. 3 Şeybender Sok, off Asmalimescit. 0212 292 7368. www.babylon.com.tr. Cover charge. Bus/metro Taksim.

A real local favorite, this venue has live bands most nights, usually Turkish rock and pop acts. The atmosphere is laid-back and grungy, rather than anything too flash, with the program posted outside. 11c Büyükparmikkapi Sok. 0212 244 2558. www.hayalkahvesibeyoglu.com. Metro/bus:

Live jazz nightly at a big classy club in Ortaköy, open during winter months only. Boasting an international line-up with stars from US, Europe and South America, theren is also a restaurant serving European food and pleasant courtyard. 10 Salhane Sok, off Ciragan Cad. 0212 327 5050.www.istanbuljazz.com.Tickets from 40 TL. Bus/boat to Ortaköy.
Nardis Jazz Club GALATA
Live music from Turkish and international acts every night in this stonewalled cozy den draws in the jazz fans. The venue was created for local musicians and their friends by the husband-and-wife owners Önder (musician) and Zuhal Focan. Food and drink is pricey, but the small round tables and tiny balcony make it a friendly joint. 14 Galata Kulesi Sok. 0212 244 63 27. www.nardisjazz.com. Most tickets from 25 TL. Bus/metro Taksim. 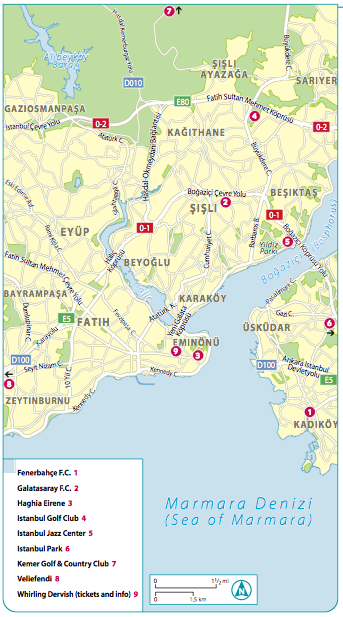 Dance, Music, and Theater
Akbank Sanat BEYOGLU
This privately sponsored cultural center has a small theater, cinema and even its own chamber orchestra (a good example of the benefits of banks sponsoring the arts). Hosting regular local dance groups, concerts, and films, and a prominent venue in the city’s arts festivals (see Savvy Travelerp 160), its monthly program is displayed in the window. 1 Zambak Sok, off Istiklal Cad. 0212 252
3500. No credit cards. www.akbank sanat.com.
Atatürk Kültür Merkezi TAKSIM

This Taksim Square landmark is a multi-purpose arts and cultural center, its main concert hall seating 1,300 plus a second concert hall, chamber theater, and cinema. Home of the state ballet, theater and opera companies, its events are posted outside near the box office, and tickets are cheap. Closed for refurbishment in 2008, it is due to reopen early 2009. Taksim Meydani. Box office 0212 251 1023. www.idobale.com. Tickets approx 10–25 TL. Metro/bus: Taksim.
Cemal Reşit Rey Konser Salonu HARBIYE

A large theatre that is home to its own symphony orchestra, with a regular and varied program including classical, jazz, and world music, plus occasional traveling ballet and modern dance companies. Closed during summer. Darülbedayi Cad, Harbiye.0212 232 9830. www.crrks.org.
Cemil Topuzlu Açikhava Tiyatrosu HARBIYE

Located inside the gorgeous grounds of the French consulate, this small theater is a venue for Istanbul’s theater and film festivals (see Savvy Travelerp 160). Look on the noticeboard outside for events. Istiklal Cad. 0212 393 8111. www.consul-france-istanbul.org. Bus/Metro: Taksim.
garajistanbul GALATASARAY
A new venue for contemporary performing arts, this space was created in the basement of a car park, not the likeliest venue for such a vibrant arts group. Launched by a group of local artists in early 2007, it has quickly made a name for itself, hosting performances from visiting avant garde dance and theater troupes, and producing works by in-house writers through their production company
GarajPro. 11A Kaymakam Reşat Bey Sok, off Yeni Çarşi Cad. 0212 244 4499. www.garajistanbul.com. Tickets approx 10-20 TL. Metro/ bus: Taksim.
Haghia Eirene SULTANAHMET

The famous Byzantine church in the grounds of Topkapi Palace (see p 14) is rarely open—in fact your only chance is for an orchestral concert during June’s Istanbul Music Festival. These will usually be the opening and closing nights, but take any opportunity to go, even just to appreciate the venue, which means booking well in advance. Topkapi Sarayi. www.iksv.org.

Galatasaray Mevlevihanesi were hosting twice-monthly sema ceremonies by the Dervishes, but since it was closed for refurbishment (due to open early 2009), the performances took place most nights at
Sirkeci station, on the railway platform. While this certainly makes semaaccessible to visitors, with many outlets selling tickets, the most authentic experience is at a dervish lodge. The staff at Les Arts Turcs, a cultural organization with tours, Catch the sema ceremony of the Whirling Dervishes. courses and information, organize low-key groups to visit the Museum for the Study and Preservation of Tasavvuf (sufi) Musicon Monday nights from 9pm to experience the very spiritual ceremony, with the white-robed dervishes spinning, slowly, to attain spiritual enlightenment. It is a somber ceremony, which can last for several hours. It’s advisable to go in a group, rather than alone, as this venue does not always welcome visitors. Dress respectfully (women should wear headscarves); no photographs allowed. Highly recommended. Les Arts Turcs, 3/F 37 Incili Çavuş Sok. 0212 527 6859. www.lesartsturcs.com. Tram: Sultanahmet.

Sport
Football Clubs
Beşiktaş FC GUMUŞSUYU
The most accessible ground, a 10minute downhill walk from Taksim Square, with a stunning view of the Bosphorus and Dolmabahçe Palace (see p 20) if the match gets too boring. Beşiktaş’s last league victory was 2003, but have yet to make inroads into European trophies. Youwill find a healthy number of women and families in the crowd. Inönü Stadium. 0212 310 1000. www.bjk.com.tr.
Tickets from 30 TL. Bus/metro: Taksim. Then walk.
Fenerbahçe F.C. KADIKÖY
Over on the Asian side in the spectacular stadium, one of Europe’s finest, theCanaries are Turkey’s

most successful club, pipped to the post for the league in 2007–2008 by Galatasaray. Their kit shops are modestly called Feneriums. Şükrü Saraçoglu Stadium, Kiziltoprak. 0216 449 5667. www.fenerbahce.org. Tickets from 35 TL. Ferry: Kadiköy, then walk.
Galatasaray F.C. MECIDEYKÖY
Turkey’s most famous (and arguably most supported) team, ‘Cim Bom’ have won the domestic league four times since 2000, plus the UEFA Cup in 2000 over Arsenal. The infamous Ali Sami Yen stadium (remember the banner ‘Welcome to the Hell?’) will soon be discarded for a muchneeded, larger new ground, from late 2009. Ali Sami Yen Stadium, Mecidiyekoy. 0212 273 2850. www.galatasaray.org. Tickets from 30 TL. Metro: Mecidiyeköy.
Motor Racing
Istanbul Park TUZLA

On the Formula 1 circuit since 2005, this new 5.3km race track has 14 bends (including the famous Turn Eight) and mammoth capacity of 130,000. Dates of the F1 are subject to change —in 2009 it will be in August. Bear inthe mind that all hotels bump their prices up over the Formula 1 weekend and are booked up months in advance. Göçbeyli Köyü Yolu, Istanbul Park Circuit, 0216 677 1010. www.istanbulparkcircuit.com. Ticket hotline 0216 556 9800.
Golf
Istanbul Golf Club LEVENT
One of the oldest clubs in Europe, going strong for over a century, this is the closest golf club to the city, north of the centre. Non-members are welcome any time at the 11-hole course (book ahead), with driving range, putting and chipping greens, although it gets busy at weekends; booking recommended. Green fees 85 YTL Mon–Fri; 135 TL Sat and Sun; 45 TL club hire. Eski Oto Sanayi
Sitesi Karşisi, Harp Akademileri içi, Büyükdere Cad. 0212 324 0609. www.igk.org.tr. Metro: 4. Levent.

Horseracing
Veliefendi BAKIRKÖY
The historic racecourse, headquarters of the Turkish Jockey Club, started night races for the first time in August 2008, making for a buzzing atmosphere. Although Atatürk promoted this noble sport, most people are more interested in the betting than any particular equine affinity! The rules at betting counters are pretty easy to understand. Races run three times a week (usually Wednesday, Thursday and Sunday) but at time of writing days and times of their 2009 season were not con-
firmed. International jockeys and horses participate in the most lucrative race meeting of the year, the Topkapi Trophy in September. Şans (which means luck) Lokanta is a beer-and-chips type of place, with Byerley Türk a better restaurant with local food. Check their website or the Turkish Daily Newsfor race schedules. Entry 2-10 TL. Türkiye Jokey Kulübü, Veliefendi Hipodromu, Bakirkoy. 0212 444 0855. www.tjk.org.Tram to Zeytinburnu, then minibus or taxi.

Even as early as 2008, the city was breaking into cultural party moodas it prepares for Istanbul 2010 – European Capital of Culture, awarded to three European cities every year. Even its preparation and publicity work has been entertaining, with open-air concerts, street parties, and music and drama workshops—plus extensive restoration of mosques and monuments, and areas like Tarlibaşi (see
Modern Istanbul bullet 5) getting a facelift. Before your visit, check out www.istanbul2010.org for listings of all events throughout 2009–2010, and get ready for open-air opera, street-theater and
free concerts—plus a whole load of visitors.

What’s On?
Listings of theater, dance, movies, concerts and sporting events can be found in the monthly English edition of Time Out Istanbul (www.timeout.com.tr/english). The English daily newspaper Turkish
Daily Newsalso has basic listings. Buy advance tickets for concerts, plays or sports events at www.biletix.com—also at the Biletixout- let at Istiklal Kitabevi, 55A Istiklal Cad. Their website has good day-to- day listings of what’s on. Most cultural festivals (see p 160) are organized by the excellent Istanbul Kültür Sanat Vakfi (Istanbul Foundation for Culture and Arts); check www.iksv.org for dates and listings. Look out for flyers appearing on the walls of Istiklal Caddesi
advertising concerts. The movie halls, especially around Istiklal Caddesi, often show recent Hollywood releases. Check they are subtitled into Turkish, rather than dubbed (‘Orijinal dilde mı?). Local Englishlanguage press will have the complete listings.
Football—a National Obsession
Between late August to early May, it’s hard to avoid the football (soccer) season, especially as Turkey’s top league, the Super Lig’s top three teams are from Istanbul; Beşiktaş, Fenerbahçe and Galatasaray.
If you’re a fan, I recommend going to a match—although given the intense passion and rivalry of supporters it’s best to avoid a local derby. If possible, experience the wonderful Inönü Stadium to see
[email protected]@—and I’m not even trying to disguise my allegiance here: They were my team of choice when living in Istanbul in 1998 and I cheered them on at home games. Many women and families attend matches, certainly more than in England, especially in my favorite Yeni Açik section of the stadium—which also has the best view of the Bosphorus and glimpses of Dolmabahçe Palace’s clock tower.