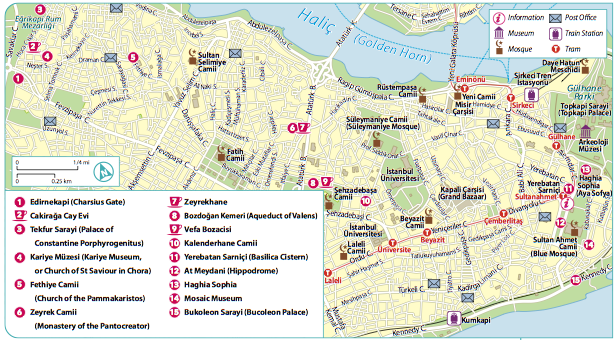 You’ve seen plenty of Istanbul’s mosques,now it’s time for its world-famous Byzantine monuments. Once called Byzantium, Emperor Constantine I made the city capital of the Roman Empire in 324AD, renamed it Constantinople, and adopted Christianity. Today’s Istanbul boasts Byzantine-era churches, cisterns and squares. Starting at Edirnekapi, geographically the tour’s highest point, you can walk
between most venues and although it looks like a long list, you’ve probably visited some on previous days. START: Bus to Edirnekapi.

The name of this gate, at the 6.5 km-long fifth-century city walls built by Emperor Theodosius II (408–450AD), now refers to the area of a mass transport hub, best seen when you climb the poker-straight walls. Although this is a restored area, you can edge a little west, off the main road to see part of its original structure, with Ottoman carvings over the arch. @30 min. Bus no.87 to Edirnekapi.

Restunder the leafy canopy against the city walls for a glass of Turkish tea – and try to buy karpuz watermelon (if in season) from the adjacent stall. Hoca Çakir Cad. Bus: 87 to Edirnekapi. $.

Closed for restoration since 2006 (completion date unknown), you can visualize the magnificence of this former Byzantine palace, built into the city walls, but now a mere shell. Since completion in the early 14th century, after the Ottoman conquest it became a brothel after the Ottoman conquest, and later a pottery workshop and a poorhouse before being abandoned in late 18th century. Pop into the crowded cooing Pigeon Market (weekends only) in the adjacent sports court for hearty trading
in birds costing up to $500. (It’s not really Byzantine, but I could tenuously trace it to the centuries-old
Middle Eastern hobby of pigeon racing.) @15–30 min. [email protected] Cad.
Bus no.87 to Edirnekapi.

This modest-look-ing 11th-century church later gained its world-class frescoes and mosaics procured by Theodore Metochites (1270–1332), writer and senior member of the Byzantine administration who died right here in 1332.
Amongst these stunning works, reflecting a new art mentality of the time, look out for his portrait in the inner narthex. Metochites took the genealogy of Christ as his starting point when commissioning mosaics covering its domes and walls. The two domes of the inner narthex hold the centerpiece—Christ, plus the Life of the Virgin series. Despite being converted to a mosque soon after the Conquest, it’s interesting to note that nothing remains from the Ottoman period. @60–90 min.
(see also Best In Three Days, p 20).
5- Fethiye Camii (Church of the Pammakaristos).

Nestled in Fener (see Neighborhood Walks p 76) 10 minutes away, this stone-and-brick façade houses a charming display of Byzantine mosaics. Like other churches of the era, it was converted into a mosque after the Fall of Constantinople in 1453, and much later a museum. Its mosaics and frescoes were only unearthed in the late 20th century, of which the startling centerpiece is the mosaic of Jesus with the prophets of the Pentateuch covering the dome of the grave chapel. @30 min. See p 77.
6- Zeyrek Camii (Monastery of the Pantocreator).

I love the cobbled walk up to Küçükpazar from the main road, now a rundown neighborhood of
wooden houses and football-playing kids but once a wealthy Byzantine area. This mosque (almost in ruins and due for restoration from late 2008) was the original church of the monastery built by Empress Eirene Komnena in 1118–1124, after which Mehmet II turned the monastery into
a medrese(religious school) and the church into a mosque. Closed outside prayer-times, ask around for the caretaker (tip appreciated) who will show you its dark high-ceilinged interior, and hopefully its ornate marble mosaic floors, now hidden by carpet. @20 min. Ibadethane Sok.Tram: Laleli, then walk.
Christ adorns the dome at Fethiye Camii.
7- Zeyrekhane.

Sip a (pricey) coffee or taste classic Turkish dishes from the restaurant’s terrace, a restored building within the monastery complex, perfect for a Byzantine tour. 10 Arkasi Sok. 0212 532 2778. Tram: Laleli then walk, or bus to Atatürk Bul. $$$.
8- Bozdogan Kemeri (Aqueduct of Valens).

You probably passed under these sturdy arches from the airport, or by bus to Edirnekapi. This 4th-century two-tiered aqueduct completed under Emperor Valens carried water from Belgrade Forest to the palace, still in use centuries later. Follow it a few meters west to the arches’ north ide to join locals drinking tea, my favorite way to appreciate this significant Byzantine feat of engineering. @20 min. Aqueduct runs parallel to Mustafa Kemalpaşa Cad.

Awell-trodden stone threshold indi-cates its age, locals’ favorite since 1876 and an unchanged tiled interior. If you don’t fancy drinking boza, made from fermented millet, try a fruity @ira—or a simple icecream. 104 Katip Çelebi Cad. Bus: 87 to Edirnekapi. $.
10- alenderhane Camii.
Site of a church since the 6th century, the red-hued brick church’s once-gloomy interior improved
when the Ottomans installed windows—after of course converting it to a mosque post-1453 and renam-
ing it. Still functioning today, I love its gray-and-pink hued marble walls, with shafts of light creeping through high windows. Don’t miss fragments of frescos in the entrance hall above the doorway—most of the frescos discovered during its 1966 restoration are now in the Archaeological Museum (see p 14). @20 min. 16
Mart Şehitleri Cad. Open dawn-dusk. Tram: Üniversite.

The Byzantines used their engineering know-how to bring water to the city (see Best In Two Days, p16), despite droughts and sieges. Founded in 532AD by Emperor Justinian, this vast underground cistern held around 100,000 tones of water, with 336 nine-metre-high columns holding up the roof, thought to be built by 7,000 slaves.
Once traversed by rowing boat, now by walkway for visitors, this is one of countless cisterns lying under the city. Opposite the entrance, the Windows galore at Kalenderhane Camii, thanks to the Ottomans.

Million Stoneis what remains of a monumental landmark where distances from Byzantine’s capital to
other importance cities were once written. You’re now standing on Divan Yolu, one of the most impor-
tant streets of the empire, leading from Constantinople to Rome. @40 min. See p 16 for details.

Ignore the camera-wielding tourists and imagine thousands of fans cheering on chariot racing in one of the Empire’s largest hippodromes—also past venue of public executions. (See Neighborhood Walks, p74.) Built in the 3rd century and enlarged by Constantine I, this was the past venue where 30,000 were killed during the 532 AD Nika Riots between rival supporters of the Blue and Green chariot teams, with deep political roots. No horses or executions here today, just three ancient monuments, of which the Egyptian Obelisk was later adorned with scenes of Theodosius I (346–95AD) at the Hippodrome’s royal box. @30 min. At Meydani. Tram: Sultanahmet.
13- Haghia Sophia.
Rebuilt by Emperor Justinian in 537AD, this hulking, almost squat exterior contrasts with its ornate
interior (see Best in One Day, p 7).
This was a basic rule of Byzantine architecture, that the exterior should be modest, saving your
attention to the inside. When you’ve savored the religious mosaics from the upper balcony, wander outside to find the Byzantine frieze of sheep, the remains of the earlier 5th-century Haghia Sophia. @90 mins. See p 7, bullet 1.
14- Mosaic Museum.

Nestled five minutes away behind Arasta Bazaar, the stone exterior is all that remains of Emperor Justinian’s (487–565AD) vast 6th-century Byzantine Great Palace, in ruins since 1206.
The mosaics you see today from the walkways—huntsmen spearing gazelles, tussling elephants and
lions—is a fraction of the original, unearthed during excavations in 1912, and some of the last remaining Byzantine non-religious mosaics.
Don’t miss the display inside of how these incredible mosaics were discovered and restored. @40 min.
Arasta Ç[email protected],Torun Sok. 0212 518 1205. Tues–Sun 9am–4pm; 5 TL.
Tram: Sultanahmet.
15- Bukoleon Sarayi (Bucoleon Palace).

Originally the living quarters of the Byzantine emperors’ Great Palace, this is the last remaining wall (and, given its propensity to be inhabited by tramps, not advisable to visit after dark). Built on the waterfront by Emperor Theophilos in 842AD, the western façade was demolished in 1873 when the railway line to Sirkeci was built. @10 min. Kennedy Cad. Train: Kumpaki.
What remains of the great Bukoleon Sarayi.