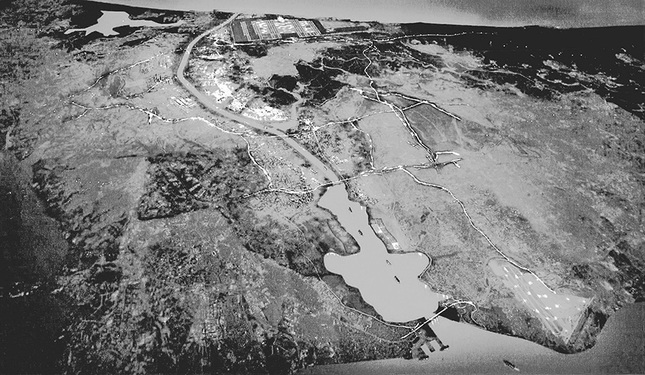 The population of the town to be built around new Turkey’s mega project Kanal Istanbul has been reduced to 500,000 upon the order of President Recep Tayyip Erdoğan. Furthermore, tall buildings will not be included in the project that will connect the Marmara Sea to the Black Sea. The Turkish Sabah daily revealed the first visuals prepared for showing how Kanal Istanbul will look when it is completed. The details of the project were determined in the meeting held last month with Erdoğan, and it was decided that natural water resources and green areas around the canal will be preserved as much as possible. The population of the new city has now been decreased from 1.2 million to 500,000.

A quarter of a million people will reside on both sides of the canal, and natural flora will be preserved along the bridges over the canal in order for animals to continue living in their natural environments. Millions of cubic meters of excavation soil from the project will be used in the port and airport construction and in the closure of the canal.

The tendering process will commence within the coming weeks, and the mega project worth $10 billion will gradually be put out for tender. The feasibility works of the project has been completed, and it was noted that MWH Global, which built the Panama Canal, is interested in the project along with leading firms from China, Italy and Russia. Six bridges will be built across the canal, which will be 43 km long and 400 meters wide on average. Four of these bridges will be connected to main highway routes.

Due to the high number of areas requiring expropriation, the previous area proposed for the project was amended. Now, the canal will only cross through the districts of Küçükçekmece, Başakşehir and Arnavutköy. The polluted Küçükçekmece Lake will be added to the canal, while the Sazlıdere Dam has been excluded from the scope of the project. Moreover, the shape of Kanal Istanbul will be v-shaped, while the width of the lower part will be 100 meters. The distance between the two lines of the v-shape could reach 520 meters with a depth reaching 25 meters.

Forest areas, rivers and river beds will be preserved, and open-air areas will include preserved biodiversity, open-air facilities, recreational areas, small-scale food production and flora consisting of various trees. Archaeological parks will also be built, and a zoo will be constructed close to the forest area as a part of the open-air network.

Upon the instruction of Erdoğan, the buildings will have a maximum of six floors, and taller buildings will be constructed away from the canal. The canal will be built to allow the passage of large vessels. After the completion of the new urban design plan according to the new population, a zoning plan will be issued. The zoning plan process will be conducted by the Istanbul Metropolitan Municipality and BİMTAŞ, which is a company belonging to the municipality.

The city to be built around the canal will have a unique silhouette and will be built gradually, starting from villa-type buildings to six-floor housing projects. It was indicated that the tallest buildings will be located away from the canal and open-air areas within the settlement area in the “Analysis of the Number of Floors” and accordingly, the view of the canal from the settlement areas have been maximized. The analysis also stressed that business centers will lie along a north-south direction along the east bank of the canal and that the highest buildings will be grouped around metro stations.

End of traffic in the Bosporus

With the completion of Kanal Istanbul, two peninsulas and one island will be formed. Moreover, the project aims at putting an end to heavy Bosporus shipping traffic. Approximately 150 to 160 vessels will pass through the canal on a daily basis. The project aims to offer easy access to all business centers, industrial areas and workplaces with its multiple-model approach. Bridges will support infrastructure and settlement efficiency, and gain the most benefit out of various public transportation routes. Large intersections and fast train stops are shown in a white circle on the project file submitted to Erdoğan, while local metro and tram stations are marked with a thicker line. Furthermore, these areas link large settlement areas with strategic business centers, and links between all other transportation methods have been shown in the project file.

Details about the Kanal Istanbul Project, an artificial sea-level waterway and a new town to be located across 95 acres of land, have been released, indicating a downsizing of original plans.

It has reportedly been decided that the projected population and the number of bridges in the new town, which are to be established around Kanal Istanbul should be decreased. According to the new details, there will be six bridges and the town’s population is expected to be around 500,000 rather than 1,200,000 as previously estimated. The buildings will be a maximum of six-stories tall.

The urban design project was re-discussed in a meeting in which President Recep Tayyip Erdoğan and ministries were present. Planning of the new town had been made with the assumption that the population would be 1,200,000. But it was later decided that this number should be halved in order to avoid population density. The new town will be built on either side of Kanal Istanbul, and each side will house 250,000 people.

The dimensions of Kanal Istanbul have also been decided as 400 meters wide, 43 kilometers long and 25 meters deep. The new town will contain conference halls, tourism centers, parks and trade centers, and will reportedly have a silhouette and be built with Anatolian Seljuk Sultanate motifs.

The Kanal Istanbul project was announced by then PM Recep Tayyip Erdoğan in 2011 and is to be built on the European side of the city, connecting the Black Sea to the Sea of Marmara leading to the Aegean and Mediterranean seas. The project plans on bisecting the current European side of Istanbul, forming an island between the continents of Asia and Europe.

A special planning office will also be set up, to construct an environmentally friendly and modern settlement within the Kanal Istanbul project. A team of scientists, architects, urban planners and sociologists will study the soil and environmental conditions, and after a workshop is held for the plan, preparations for the new city will be completed.

According to protocol between BİMTAŞ (Construction Consultancy affiliated with the Municipality)and the Spatial Planning General Directorate of the Ministry of Environment and Urban Development, the project, which will be built between Küçükçekmece and Arnavutköy districts, will be financed by the ministry.