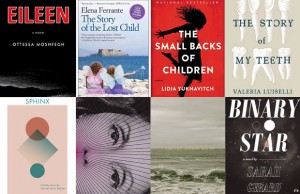 As part of the 52nd Week of Libraries celebration, Goethe-Institut Istanbul will organize an exhibit displaying the “Finest German Books 2015” collection.

According to a written statement made by the institute, the 25-book collection is the result of a long-running contest that is organized in Germany by the Foundation of Book Arts every year.

With the contest, the foundation aims to highlight the design and quality of the book rather than its content and draw attention to the shape of book.

Foreign publishing houses can join the contest but the book should be completely produced in Germany.

The “Most Beautiful 25 Books” were chosen based on their design, concept and workmanship.

Among 756 books sent to the contest, a jury of two experts has chosen 25 of the “most beautiful” books, including five books in different five categories.

After being displayed in the stand of the Frankfurt Book Fair during the TÜYAP Book Fair in Istanbul in November last year, the collection was bequeathed to the Goethe-Institut Istanbul.

The exhibition is open between March 30 and April 2.

Organizers of the upcoming 13th Istanbul Biennial have been forced by circumstances to abandon their plans to stage art exhibitions in public areas like Gezi Park, Taksim Square and elsewhere, according to the show’s main curator.

As such, the biennial team has been forced to opt for private venues for the exhibitions.
Earlier the biennial teams had announced that it would use public buildings that were temporarily left vacant by urban transformation as exhibition venues.

“These may include courthouses, schools, military structures or post offices, former transportation hubs like train stations and ex-industrial sites such as warehouses and dockyards, as well as the contested Taksim Square and Gezi Park. The hallmarks of current urbanism, such as shopping malls, hotels and office-residential towers, are being considered sites for artistic interventions as well,” the organizers had said in a written statement.

Following a change in the dates of the event, Erdemci said the biennial, whose title this year is “Mom, am I barbarian?” could be visited between Sept. 14 Oct. 20 at Antrepo No.3, Galata Greek Primary School, ARTER, SALT Beyoğlu and 5533.

The 13th Istanbul Biennial will focus on the theme of public space as a political forum, according to the press release sent by the biennial team. Entrance to the event will be free of charge.