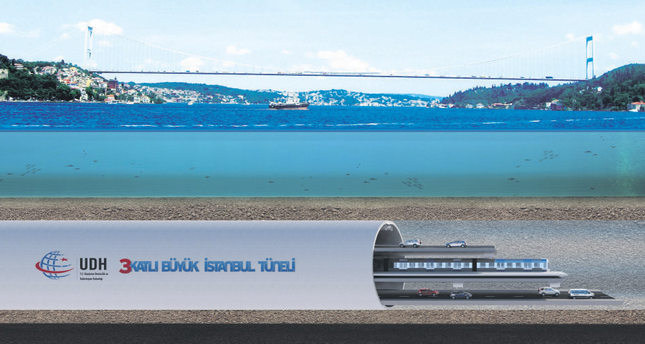 A total of 12 companies placed bids for the research, project and engineering services tender of the Three-Level Grand Istanbul Tunnel project. A total of 23 companies had received the project’s specifications.

As a part of the project, studies will be conducted on land, sea and estuary drilling, the geophysical, geotechnical and geological conditions, routes and preliminary and final feasibility surveys to determine ground data. The engineering projects are aimed to be finalized within a year after the tender process.

The Three-Level Grand Istanbul Tunnel, which will pass beneath the Bosporus, will be comprised of both a road and a railroad in a single tube. The middle layer will have a two-way railroad, while the upper and lower layers will be built in a manner suited to the passage of vehicles and consist of two lanes each.The Three-Level Grand Istanbul Tunnel was one of Prime Minister Ahmet Davutoğlu’s most important election promises as the government seeks to find a solution to Istanbul’s traffic problems. With the outcome of the Nov. 1 elections, which saw the Justice and Development party win with nearly 50 percent of the vote, the implementation of the mega projects has gained momentum.

The Tunnel will be integrated with TEM Highway, E-5 Motorway and Northern Marmara Highway. The journey between Hasdal Junction on the European Side of Istanbul and Çamlık Junction on the Asian Side will drop to 14 minutes with the construction of the tunnel and 6.5 million passengers a day are expected to use the tunnel.

As one of these mega projects, the Three-Level Grand Istanbul Tunnel will be the first three-level tunnel in the world and will consist of both a metro line and dual motorway. The fast metro line will enable a 40-minute commute from İncirli to Söğütlüçeşme and a 14-minute commute by car from the Hasdal intersection to the Ümraniye Çamlık intersection. The project is included in the 2023 Transportation Projection, an initiative to reduce Istanbul’s traffic woes. This project combined the “fast metro tunnel project,” which will start from Bakırköy-İncirli along the E-5 highway and reach Söğütlüçeşme, similar to the Marmaray and the “highway tunnel” with 2×2 lanes, in order to relieve the traffic on the Fatih Sultan Mehmet Bridge, the second bridge on the Bosporus. Instead of separate tunnels, a single tunnel will be built for both the metro and a dual highway Bosporus crossing.

The tunnel will enable faster and cheaper transportation between the two sides of Istanbul. It will integrate nine different urban train systems with a fast metro track, which is used by approximately 6.5 million passengers on a daily basis. It will also enable easier and faster connections to ring roads; thus connecting all main arterial roads.

The tunnel will integrate local metro lines including the Başakşehir-Bağcılar-Bakırköy Metro, the Yenikapı-Aksaray-Airport Metro, the Kabataş-Bağcılar Tram, the Topkapı-Sultançifliği Light Metro, the Mahmutbey-Mecidiyeköy Metro, the Yenikapı-Hacıosman Metro (Taksim Metro), the Üsküdar-Ümraniye-Çekmeköy-Sancaktepe Metro, the Kadıköy-Kartal Metro, also known as the Marmaray, Istanbul’s first sub-sea tunnel train under the Bosporus, and suburban train lines.

Lastly, the project is designed to leave residential areas undisturbed and support the TEM axis so as to avoid an urban eye-sore that would ruin the city’s skyline.