The simple comparison of the number of houses and of households (149 and 242, respectively) clearly tells us that more than half of the houses in our neighborhood must have contained at least two households. There must have been approximately 150 households in the mahalle that had to share the same dwelling-unit with another family. Although shareholding of the same dwelling-unit by kin or non-kin households was certainly not uncommon at the time, a nonnegligible proportion of these coresiding households must clearly have been tenants. This must have been particularly the case for migrants to the mahalle. Each household, therefore, did not necessarily correspond to a houseful of people. Each house contained on average more than one household, more than one family-unit. The average household size was 3.82 in Kasap ƒlyas in 1885. Had each of the households lived in a separate house, this same ﬁgure would have also represented the average number of people living in each of the dwelling-units of the mahalle. Dividing the total population by the number of dwelling-units in the neighborhood, however, we obtain a much larger ﬁgure: 5.53. This is the average number of people living in each of the Kasap ƒlyas houses, a ﬁgure that is 45 percent higher than the mean size of familial units. The corresponding ﬁgure is even considerably higher (6.32) for the Ispanakçı Viranesi, the area with the highest concentration of migrants. Most of the run-down houses in the Virane were inhabited by more than one household, and some of them, as we saw, accommodated four or ﬁve of them.
Do these raw ﬁgures, however, constitute sufﬁcient evidence for speaking of a wohnungsprobleme in the Kasap ƒlyas mahalle at the end of the nineteenth century? Are we entitled to say that Kasap ƒlyas was, generally speaking,
“overcrowded”? That is difﬁcult to assert. We know that some of the migrants, especially the bachelors, were, in all probability, living in small, cramped, shoddy, overcrowded, and relatively uncomfortable lodgings, but it is difﬁcult to say more. First of all, a comparative housing standard for the whole city
does not exist, nor are any comparable data sets for other parts of the city available, and it is highly doubtful whether such a standard could be devised at all. Second, and in the absence of any detailed cadastral maps, we do not have detailed information on the property and houses in Kasap ƒlyas itself.
For instance, we know little about how many ﬂoors each of these houses in Kasap ƒlyas had. We have an insufﬁcient knowledge of the number, type, and size of their rooms and of the various amenities that they might have contained, the size of the gardens, if any, and so forth.

Judging from the wealth, social status, and occupations of its inhabitants,what we can only dimly guess is that, despite the few konaks (mansions) that 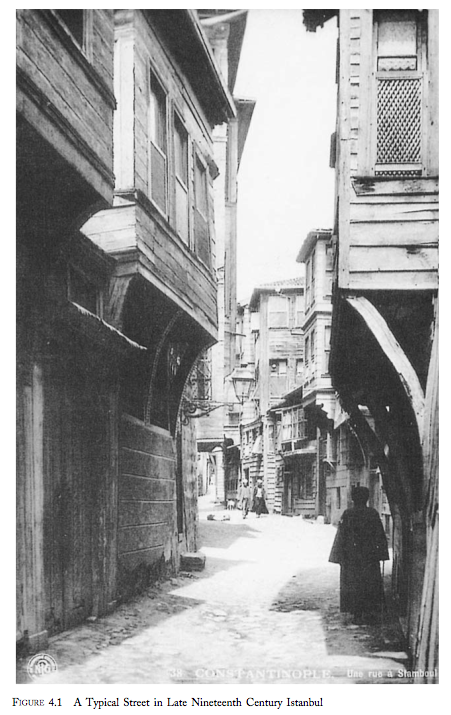 it contained, the Kasap ƒlyas houses were in general neither particularly large nor comfortable, in relation to the standards of the time. Here is how, for instance, a mansion sold in the neighborhood in the 1840s is described in the Davudpaœa Religious Court records :
…A privately owned konak with, in the upper ﬂoor three rooms, a water-closet, a pantry and a hall, in the middle ﬂoor three rooms, a bathroom and water-closet and a hall, in the lower ﬂoor a kitchen,
a toilet and a storage place for coal plus, in the men’s quarters (selâmlık), a room, a bathroom and water-closet in the top ﬂoor, a room and a bathroom and water-closet in the middle-ﬂoor, plus stables, a water-well, a garden and garden gates….”21
There were, however, all in all just four such konaks in the neighborhood in 1885 (see table 4.7). Here is how one of the more modest houses of Kasap ƒlyas was described in a deed of sale recorded by the Davudpaœa Court of Justice in the 1850s. Part of the ground ﬂoor of this house was apparently occupied by a barbershop : “…on the upper ﬂoor two rooms and a hall, and on the ground ﬂoor two rooms, a bathroom, and a barber with a shop….”22
This was the lot of most of the ordinary houses in Kasap ƒlyas. A few deeds of sale of the early nineteenth century also record even smaller dwellings that contained, for instance, just “…a room in the ground ﬂoor, a hall, a court-yard, a kitchen and a garden….”
Besides, a number of people lived in various kinds of premises (a coffee-house, a shop, a stables, or a warehouse) that were not designed to be proper houses and that probably lacked the minimum level of comfort and privacy that even those who lived in the Ispanakçı Viranesi were entitled to. According to the later population census of 1907, these people were more numerous

Istanbul gets its own Internet domain name