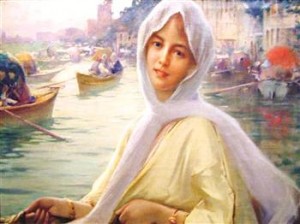 The “All Arts Istanbul” Fair will be organized for the first time in April at the Istanbul Congress Center, to showcase classical Turkish arts as well as ancient, modern and contemporary arts. The fair will host collectors and academics from various regional countries, while also displaying the paintings of renowned Ottoman palace painter Fausto Zonaro.

Zonaro lived in the area of Istanbul known as Pera in the late nineteenth and early twentieth centuries, in today’s district of Beyoğlu on the European side of the city. Over time he came to the attention of the aristocratic circles and received from them orders for his works. Zonaro painted portraits, landscapes and historical paintings, and it is claimed that “Zonaro was one of those who made a major contribution to the development of western style art in Turkey.” A prolific artist who created hundreds of works, an retrospective exhibition of his work in Florence in 1977 “received wide acclaim in the art world.”

Today, the majority of Zonaro’s works remain in Istanbul, and many are on display in the city’s leading museums. His pictures can be found in the state museums of Topkapı Palace, Dolmabahçe Palace and the Istanbul Military Museum. Other works can be found in the private Sakıp Sabancı Museum and the Pera Museum, while many also belong to private collectors in Turkey.

“All Arts Istanbul” aims to attract collectors, art lovers and art investors and includes visits to museums and artist studios, as well as exclusive collection presentations, discussions and panels.

The fair will have three different categories. The first includes traditional Turkish arts such as calligraphy, “ebru,” miniatures and tiles; the second includes antique paintings, ephemera and jewelry, while the third features modern and contemporary paintings.

During a press conference, All Arts Istanbul Chief Executive Officer Ali Güreli said Istanbul was well on its way to becoming one of the most important contemporary art centers in the world, citing the Istanbul Biennial and the seventh Istanbul Contemporary Fair are two important recent examples of this development.

“Istanbul is becoming one of the most important contemporary art centers in the world, with the Biennial and the Contemporary Istanbul Art Fair, which took place for the seventh time in 2012, being strong contributors to this development,” Güreli said.

He also drew attention to the fact that the private sector’s interest in art had been piqued in recent years. “Interesting and important exhibitions have taken place in Istanbul recently, the likes of which had never been seen in Turkey before,” he said. “After developing its contemporary art scene, Istanbul will expand its cultural, economic and touristic boundaries further with All Arts Istanbul. Intense interest in the traditional arts, the need for investment in art as a tool of modernization, is today quite tangible in these fields, even beyond the known names. All Arts Istanbul will contribute greatly to the city, culture and art.”

Meanwhile, General Coordinator of All Arts Istanbul, Prof. Dr. Hasan Bülent Kahraman, agreed that the fair represented a big opportunity. “All Arts Istanbul will create a platform for traditional, exemplary art works produced in Turkey that are neither marketed nor promoted to the fullest outside the scope of auctions and some limited networks,” he said. “Collectors who have so far presented their accumulations only in auctions will be given a chance to present, promote and – if the occasion arises – sell their valuable objects, and the fair will create an opportunity to enrich and transform existing collections.

The fair will be a platform where buyers and sellers will be able to come together in a highly contemporary setting.” Güreli said the fair would contribute to the further growth of the arts sector.