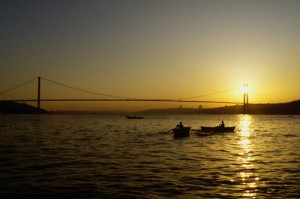 There’s a saying many attribute to German philosopher and cultural critic Walter Benjamin: “The illiterate of the future will not be the man who can’t read the alphabet but the man who can’t take a photograph.” And, in fact, one of the fastest rising trends in recent years must be counted as photography.

Professional cameras can be seen hanging around necks everywhere you go. And everyone seems to be in pursuit of capturing the most arresting photos they can. Within the general panorama of Turkey, there’s little question that İstanbul occupies a special spot in people’s lenses. But the shots taken of İstanbul seem to be changing with time. It’s not just those classic shots taken across from Kız Kulesi, showing off the sunset. In fact, those on Instagram in particular seem to be in hot pursuit now of sharing with us the more unknown, unseen quarters of the city. And some serious time is being spent on this pursuit.

Golden Horn metro stop
The Golden Horn metro bridge, which opened on Feb. 15, 2014, was heavily criticized for “ruining” the silhouette of İstanbul. These criticisms withered with time and have since come to a halt. In fact, this disputed bridge has now become a favorite site for those interested in photographing the city. Some even ride the metro here just to get a good shot.

Tomb of Yahya Efendi
Yahya Efendi of Beşiktaş was nursed by the same woman as Süleyman the Magnificent. After Grand Vizier Mustafa was killed, relations between Yayha Efendi and Süleyman went sour. In reaction to the criticisms he received about the way Mustafa was killed, Sultan Süleyman removed Yayha Efendi from his teaching position at Sahn-ı Seman Medresesi, where he had been working, and forced him into retirement. But Yayha Efendi went on to set up the dervish lodge that now stands on the hills of Beşiktaş, breaking off formal relations with the palace. His tomb is said to be one of the four main protectors of the Bosporus. The small gazebo that lies next to the mosque where his tomb is located is a favorite spot for photographers looking out onto the city.

Pierre Loti hill
Looking out over the entire vista of the Golden Horn, the Pierre Loti hill is a place many wish to visit for the views. This spot is named after 19th-century French author Pierre Loti because he used to love to come here and drink Turkish coffee and smoke nargile. This is another spot at which avid photographers of İstanbul are known to lie in wait, anticipating the next best shot they can get of the city.

Beşiktaş-Kadıköy ferry
Some people love the ferries that crisscross the Bosporus and Sea of Marmara. The Üsküdar-Eminönü, Üsküdar-Haliç, Kadıköy-Karaköy or even Eminönü-Kadıköy lines… the list goes on and on. But the Beşiktaş-Kadıköy ferry takes a little longer to complete its journey than the others, and because it passes so close to the infamous Kız Kulesi, it is the line of choice for those interested in capturing the city. And, of course, there is much to capture when you take one of the long rides that goes up and down the Bosporus, bringing you within arm’s reach of places like Ortaköy, Kuzguncuk, Beylerbeyi, Kandilli, Anadoluhisarı, Kanlıca and Emirgan.

Maçka Park cableway
Another hot photography base is the Maçka Democracy Park cableway. It takes about three-and-a-half minutes to ride from one side to the other, but this route has turned into almost a laboratory work spot for photographers — a perfect spot from which to capture Dolmabahçe Palace!

Beylerbeyi Mosque courtyard
The founder of the famous Beylerbeyi Mosque, also known as the Hamid-i Evvel Mosque, was Sultan Abdülhamid I. Deeply affected by having been orphaned at a young age, this sultan ordered this mosque built in the name of his mother, Rabia Sultan. The mosque, which looks out over the Bosporus, can be heard to the west as well as to the east, and carries the stylistic traces of 18th-century Ottoman times. The outer courtyard, located to its northwest, makes you feel as though you are in the palm of the Bosporus. This being the case, once again, you can find city photographers aplenty here.

Kadıköy’s İstanbul bookseller
You can find İstanbul booksellers in many touristic spots around the city. This particular bookseller, which functions on the terrace floor of one of the buildings at the Kadıköy docks, is very popular these days. You can find not only books concerning İstanbul here but all sorts of great little gift ideas. And as you sip your tea here, don’t forget to photograph old Kadıköy, and in particular the historic Haydarpaşa train station.